I love French Onion Soup, it’s my all time favorite. I do order it in restaurants, usually without the bread, but I never really know what’s in it…This isn’t a soup, but it has all the flavor of a good french onion soup though. I think I might play with it and see if I could turn it into a soup, a french onion and zoodle soup sounds pretty good to me. I served this with halibut, but if you added some left over pot roast or beef tips, it could be a whole meal. 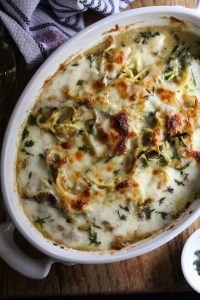